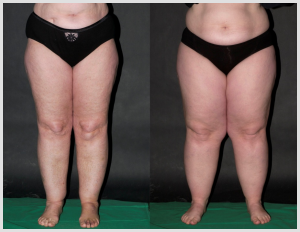 Lipedema is a disorder of fatty tissue generally affecting the legs, which causes the legs, and sometimes the arms, but not the feet, to accumulate fatty tissue. It is part of the spectrum of soft tissue lymphatic disorders treated at NYC Surgical Associates.

It is distinguishable by five characteristics:

Although first identified in the United States at the Mayo Clinic in 1940, lipedema is barely known in the USA – to physicians or to the patients who have the disease. Lipedema often is confused with obesity, and a significant number of patients currently diagnosed as obese are believed to have lipedema, either instead of or in addition to obesity.

In November 2012 the UK’s Health service the NHS first listed lipedema as the abnormal build-up of fat cells in the legs, thighs and buttocks. The NHS listed the only treatment that appears to be effective for lipedema is a procedure called micro cannula tumescent liposuction which is now routinely performed in Holland and Germany. At NYC Surgical Associates, with the enormous amount of venous, vascular, lymphatic and soft tissue disorders that we treat, we are proud to be a center of excellence and bring this modern, minimally invasive, effective treatment to the the United States.

For decades, surgeons in Germany, the Netherlands and the U.K. achieving excellent documented success with medically indicated therapeutic micro-liposuction. This specialized form of liposuction, usually performed with tumescent local anesthesia and one of the core issues is to ensure preservation of the lymphatic system while removing the diseased adipose tissue. Dr. Greuner performs lymphatic sparing therapeutic micro-liposuction at our centers.

Lipedema usually is triggered at puberty, but can worsen during or after pregnancy, menopause and following gynecologic surgery. It can also be triggered by an extremely stressful situation such as a death in the family or a divorce because cortisol (the key stress hormone) levels increase, causing an inflammation cascade, almost always misdiagnosed as weight gain or obesity.

If lipedema is diagnosed early, which currently is very rare because of the very low numbers of trained physicians, it is possible to prevent a significant expansion of lipedemic fat cells, and to alert patients to their heightened risk for obesity so they can take appropriate action.

Estimates of the incidence of lipedema vary widely, and range as high as 11% of the post-puberty female population, with conservative estimates of 17 million women in the US, and 370 million women worldwide affected.

The cause is unknown, although most people with lipedema have a significant hormonal imbalance. In addition, the times of onset or exacerbation coincide with times of hormonal disturbance, puberty, pregnancy and peri-menopause, so it seemingly is hormonal in nature.

Patients tend to gain weight in lipedemic areas and lose it in non-lipedemic areas, though there are cases where weight loss has resulted in improvement of the condition. Obese lipedema patients who undergo bariatric surgery lose fat primarily from the waist up, while the legs keep the fatty tissue. While lipedema presents itself in various ways, diagnosis is possible as early as pre-puberty when inner thigh pads present and at any age when fat gathers and drapes at knees. Symptoms of lipdemia include disproportionately large, column-like legs, legs unusually large to the knees, disproportionate hips, stomach or buttocks. As lipedema progresses, patients become increasingly heavy in the lower body. The additional, expanding fat cells interfere with the pathways of lymphatic vessels and patients can develop secondary lymphedema, a condition known as lipo-lymphedema. Many lipedema patients cannot tolerate the compression garments associated with conventional lymphedema treatment because the underlying lipedemic fat is very painful, and those patients therefore are at risk for the side effects of uncontrolled lymphedema, including recurring blood infections and fibrosis. If not kept in check through a healthy lifestyle the condition can worsen, and patients will become progressively less mobile.

Medical treatment is largely ineffective. It often includes a course of manual lymphatic drainage and bandaging by a lymphedema therapist, followed by the wearing of custom-fitted compression garments or devices — usually stockings and sometimes biker shorts. Compression prevents recurrence of lymphedema, and in some lipedema patients can reduce the pain of the affected fat. There is currently no known uniform medical procedure to cure lipedema. It is, however, successfully managed through a variety of consistently applied techniques to improve the health of the legs and prevent the condition from returning in more difficult to manage levels. Management involves reducing salt intake, frequent, gentle exercise to promote circulation in the legs, as well as maintaining a healthy circulation to reduce inflammation. Often because of the higher pressure from the affected areas, vein disease and lymphatic problems occur simultaneously. We can assess your circulation in our non-invasive cutting edge vascular lab as part of your workup to ensure that any issues with blood flow can be addressed, and it is part of your workup at our centers.

It should be remembered that lipedema is a genetic disease that progresses throughout adulthood. Early diagnosis and control is the best treatment.

Current research and clinical practice being done support surgical intervention with specialized micro cannula liposuction for lipedema. Surgeons have been successfully treating lipedema patients with specialized liposuction for over 15 years, mostly in Europe. We are also investigating these results at NYC Surgical Associates to ensure that our findings match or exceed those abroad, and are proud to be one of the only centers in America to track this data.

Prior to performing therapeutic liposuction, your circulation should be assessed. Your surgeon must ensure that you have a healthy blood supply to ensure appropriate healing, as well as minimize any risk from the procedure from abnormal blood vessels that often are present in the diseased areas.

No patient has the same anatomy, and in general each patient should have a customized approach specific to their problem. Prior to any intervention, a plan, along with the rationale behind it, are discussed, as well as non-surgical options to get each patient the best result specific to their issues at NYC Surgical Associates.